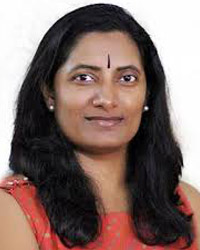 Gouri Vemula was born in 1972 in Hyderabad. Prior to her engagement with art, Gouri was a national level athlete. She holds a diploma in Painting from Jawaharlal Nehru Architecture and Fine Arts University, Hyderabad, and anMFA in Print Making from Sarojini Naidu School of Art, Hyderabad, along with a Masters in Drawing from Vijaymahantesh Lalit Kala Mahavidyalaya, Karnataka.

Vemula’s work is vividly enriched by her skilled use of the methods of etching and dry point technique as well as pen and ink drawing. Her works often unravel surreal landscapes with mythic figures of gods and goddesses, animals and human figures as well as magical objects and motifs from the natural world. Her work draws substantial influence from the mythic visual lexicon, but she also reinvents a new iconography by situation them in imagined landscapes with unreal animals or sometimes fusing them with objects. Gouri’s work draws our attention to motifs which are part of the art historical legacy of India, bit she also forges a new idiom by placing them in a contemporary context. Her delicate balancing of the images conjures the amalgamation of real and unreal; mythic and mundane and fantasy and desire.

In her most recent body of work showcased at Art Heritage, The Fantasy World of Gouri Vemula (2016), Vemula uses the signs of the zodiac as her point of departure.Unleashing her creative inner eye, she offers us a glimpse of a dream world. The living creatures that represent each Sun Sign assume mythical proportions through her evocative pen and ink delineations, With an amazing skill of draughtsmanship and an unerring sense of composition, Vemula draws from indigenous classical and popular traditions of Indian iconography, creating imagined landscapes where gods, humans and nature coexist in a passionate cosmic play.