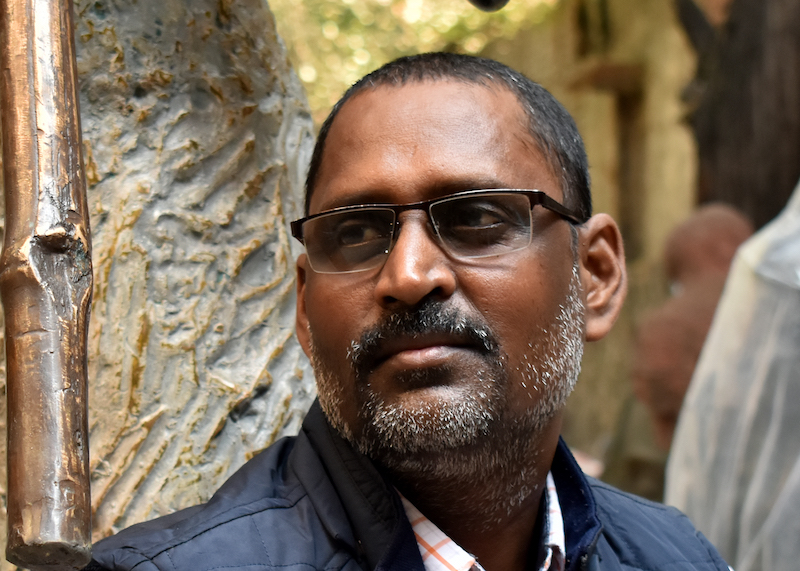 Arun Pandit was born in Patna in 1971. He completed his MFA in sculpture from the College of Art, Delhi and was the recipient of the 2018 Senior Fellowship from Ministry of Culture (India) and the 2010 Lalit Kala Akademi’s National Award. His most recent solo was in 2016 at the Lalit Kala Akademi (Power and Pathos), and he has participated in a number of group shows throughout India and abroad. Arun has also worked on a number of government commissions, including the Garuda at the Tirupati International Airport (2015).

In Arun Pandit’s hands, bronze, a tough and hardy material is transformed into a malleable ‘putty’ out of which emerge predominantly human forms that straddle the bridge between abstraction and realism. The influence of Picasso and the sharp lines of cubism merge seamlessly with Brancusi’s fluid movement, however, neither eclipse what Pandit imbued from his mentors – the sentiments expressed in the works of Ramkinkar Baij, or the power of experiential testimonies of Devi Prasad Chowdhury. Complementing form is a meticulous and almost obsessive focus on the patina, which infuses each sculpture with a distinct character and aura. Arun’s human or animal figures are never aggressive or dominating – their delicate expressions and precise gestures exude positivity, reflecting their creator’s ideology of humility and grace. The beauty of the work also comes from a combination of minimalism and sensitivity whereby scenes from everyday life come alive – a family in a caring moment, couples siting next to one another enjoying each other’s company, a shared experience, or even a cup of tea or a newspaper.