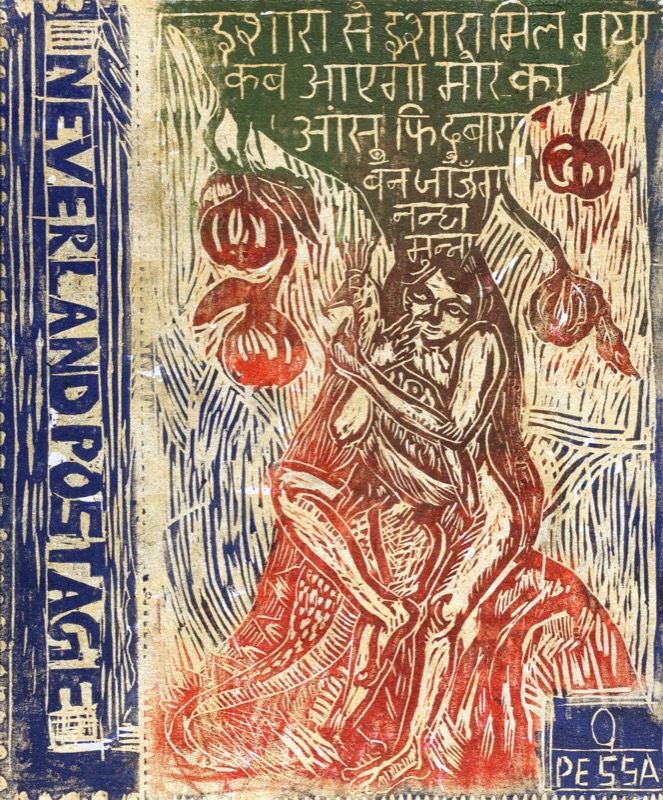 One might wonder how the Tripura-based artist Rajesh Deb’s currentexhibition is a reflection of the happy, fictional island of Neverland that is featuredin Scottish novelist JM Barrie’s Peter Pan.Artist Rajesh Deb Unveiled on March 20, the exhibition at Art Heritage, Triveni Kala Sangam, drawson the artist’s hope for a utopian world witnessed through a dystopian lens. As the name suggests, ‘Neverland Post Office’ is a body of work that is a result of Deb’s dual focus on the fictional world of Neverland as well as the haunting context in Kashmiri-American poet Agha Shahid Ali’s poetry collection The Country Without a Post Office.

The show that will continue till April 16 features paintings, woodcuts, ink works,and an artist’s book as ironic and satirical representations of the perfect society. Keeping in mind the open-ended nature of this series, Art Heritage has divided heir gallery into multiple sections, thus allowing the viewer to form their own interpretation of the artist’s narrative. A recording of poems from Ali’s A Country Without a Post Office plays in the background, giving the entire space a haunting ambience.In his works, Deb traverses the realms of fantasy in order to explore reality and create an imaginary world that depicts a place with an impossible existence.”While Agha Shahid was unable to find a post office in his country, I have been unable to locate the country for all these years—the country I hope to be a part of some day. If a country doesn’t exist, how absurd will its post office be,” the artist shares.However, while the world portrayed in Deb’s series is imaginary, the 43-year-oldartist juxtaposes it with historical and real-life characters to create a surreal,dream-like world.

The ugly side of reality Deb’s paintings evoke a feeling of uneasiness, which might possibly be a reflection of his unease towards the world as well as a rebellion against humankind’s state of being trapped between one’s desire and conventional beliefs.”Earlier, people did not like looking at my paintings. There have been times that I have been sent out of a gallery without being able to show my works. But I feel I am unable to beautify reality the way society wants me to,” explains Deb. The artist further adds, “I am not comparing places where people have been killed in the name of religion or politics. I just feel people should be aware of the harsh realities that are intrinsically connected to our everyday existence.

There is no meaning in hiding these.”Of more than 40 posters and stamps that are part of this collection, Deb’s work titled ‘Everything Happened in Neverland’, holds significant meaning. Featuring two characters — Wendy from Barrie’s Peter Pan as well as Hitler — Deb amalgamates the innocence of a young child with the qualities of a megalomaniac.”Through this, I wanted to address the absurdity of the world we live in.”Over the years, many have also considered Wendy as a mother figure to Peter Pan.Speaking about how women are considered mother figures, Deb elaborates, “It is strange that this belief does not stop us from committing crimes against them.”In another work titled ‘Footnote to History’, Deb uses the bronze figurine of the Dancing Girl of Mohenjodaro as the centre of his composition. The work, which is the largest painting in this series, while referencing Ali’s poem At the Museum alsohas Deb’s own poetry painted on canvas. This work echoes the rights of this girl who many believe was a servant or a concubine.Unlike the self-effacing nature of this historical figure, Deb’s character is confrontational, almost as if asking the viewer to reflect upon her emancipation. As mentioned earlier, it is possible to feel a sense of discomfort after the first viewing of Deb’s series. However, the artist mentions that his intention is to make his viewers have a positive and hopeful perspective from this show. “I want them to realise and reflect upon the world that we live in, and not hide it. That is the only way one can possibly reach Utopia,” Deb concludes.